The Communist Manifesto and Das Kapital 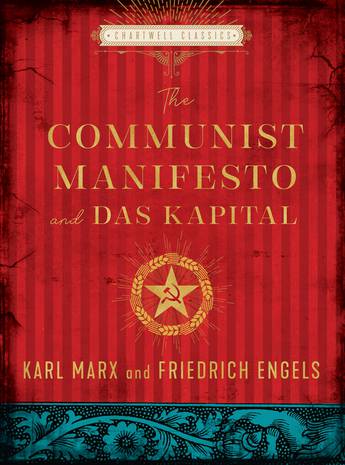 In The Communist Manifesto and Das Kapital, now available together in this highly designed jacketed hardcover, Karl Marx and Friedrich Engels discuss class struggles and the problems of a capitalist society.

The unabridged versions of these definitive works are now available together in this highly designed jacketed hardcover with an introduction by Marx in Soho actor Bob Weick. Considered to be one of the most influential political writings, The Communist Manifesto is as relevant today as when it was originally published. This pamphlet by the German philosophers Karl Marx and Friedrich Engels, published in 1884 as revolutions were erupting across Europe, discusses class struggles and the problems of a capitalist society. After being exiled to London, Marx published the first part of Das Kapital, a theoretical text that argues that capitalism will create greater and greater division in wealth and welfare and ultimately be replaced by a system of common ownership of the means of production. After Marx's death, Engels completed and published the second and third parts from his colleague's notes. A modern design makes this timeless book a perfect piece for any library.

Other titles in the Chartwell Classics Series include: Complete Fiction of H.P. Lovecraft; Complete Grimm's Fairy Tales; Complete Novels of Jane Austen; Complete Sherlock Holme; Complete Tales & Poems of Edgar Allen Poe; Complete Works of William Shakespeare; Divine Comedy; Alices Adventures in Wonderland and Other Tales;The Essential Tales of H.P. Lovecraft; The Federalist Papers; The Inferno; The Call of the Wild and White Fang; Moby Dick; The Odyssey; Pride and Prejudice; The Essential Grimm's Fairy Tales; Emma; The Great Gatsby; The Secret Garden; Anne of Green Gables; The Essential Tales and Poems of Edgar Allan Poe; The Phantom of the Opera; Republic; Frankenstein; Twenty Thousand Leagues Under the Sea; The Picture of Dorian Gray; Meditations; Wuthering Heights; Alice's Adventures in Wonderland and Through the Looking-Glass; A Tales of Two Cities; Beowulf; The Strange Case of Dr. Jekyll and Mr. Hyde and Other Stories; Adventures of Huckleberry Finn; Little Women
More books by this author More books in this series

Born in Germany on May 5, 1818, Karl Marx was a socialist, journalist, historian, economist, and philosopher (1818-1883). While studying at the University of Berlin, he joined a movement of radical thinkers known as the Young Hegelians. His journalistic writings eventually got him expelled from Germany, France, and Belgium. In 1848, he published The Communist Manifesto with Friedrich Engels and was exiled to London, where he wrote the first volume of Das Kapital and lived the rest of his life.Born in 1820, Friedrich Engels was a German revolutionist, philosopher, businessman, and journalist who, along with Karl Marx, co-founded modern socialism.