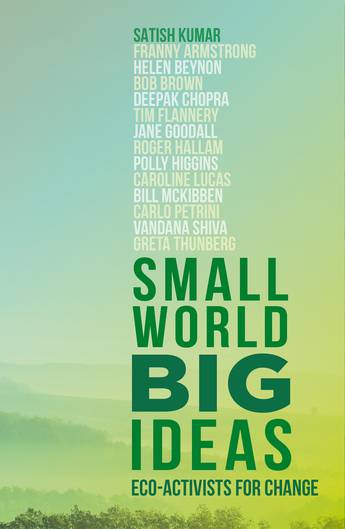 There's an activist in all of us, and you don't have to shout about it to be heard. In Small World, Big Ideas, Satish Kumar collects the voices of some of the most passionate activists fighting for a better world, and shares their insights into how we can achieve this.

Small World, Big Ideas collects twelve of the most inspiring and courageous activists together to share their stories and present an inspiring vision of what each of us can do to build a better world today.

There's an activist in all of us, and you don't have to shout about it to be heard. And to prove it, life-long campaigner and former Jain monk Satish Kumar has invited twelve of those activists he most admires to share their own inspiring stories in Small World, Big Ideas, revealing-some, for the very first time-who or what made them want to change the world and what kind of world they want to help create. This book collects the thoughts, hopes and visions of some of the most significant figures in the global fight for a better and more compassionate world. As well as Satish Kumar, we hear from:

- Deepak Chopra - The mind-body healing pioneer discusses his journey from growing up in post-war India to learning about Ayurvedic medicine, to his current work promoting spiritual knowledge and working for world peace.
- Jane Goodall - The renowned scientist and conservationist tells of the people who have inspired her in her work to protect animals, and the reasons she has for hope in the future.
- Franny Armstrong - The McLibel filmmaker writes about her politicisation as a teenager, her involvement with the Greenpeace movement and the next steps in the fight against climate change.
- Bob Brown - The Australian Green politician shares stories from his time as an ecologist and lawmaker, and his belief in how democracy can be used to bring people together to fight the looming crises facing Planet Earth.
- Tim Flannery - The explorer and ecologist tells of watching the ecosystems around him disappear, his travels to remote areas around the world and how the only hope for our future lies in connecting with others to act together.
- Polly Higgins -The late environmental lawyer discusses how the concept of Earth Law, and how she came to fight for ecocide to be recognised as a crime against humanity.
- Caroline Lucas - Englands only Green MP, Lucas writes about how she has fought all her life to change the political system, and how radical change is always possible!
- Bill McKibben - The writer and activist discusses moving from writing to political campaigning, and how he founded 350.org, the global grass-roots organization that works to halt and reverse climate change.
- Carlo Petrini - The slow food advocate tells of growing up in Piedmont, and of how we can change the world by putting food back at the centre of our lives.
- Vandana Shiva - The ecofeminist discusses how the multiple crises which she has fought - climate change, misogyny and inequality - are all interlinked, and how our response must be similarly all-encompassing.

Whether they have championed the tragic plight of Indian farmers impoverished by the domination of the agro-giants or shamed Hollywood into treating climate change as a serious concern these are the people who have made their voices heard. Their illuminating and often moving life stories will inspire all of us to get off the couch and do something ourselves to help shape a better world.
More books by this author

A former Jain monk, Satish Kumar is an international peace and environment activist and the long-standing editor of the highly respected Resurgence magazine. In 1962 he hit the headlines and gained international respect when he walked for peace to London, Moscow, Washington, and Paris. He is a regular speaker on the international circuit and was the founder of the Schumacher College—which educates its students in eco consciousness and the means for effective change.