A Handbook of Spells, Charms, and Rituals Divine in Origin 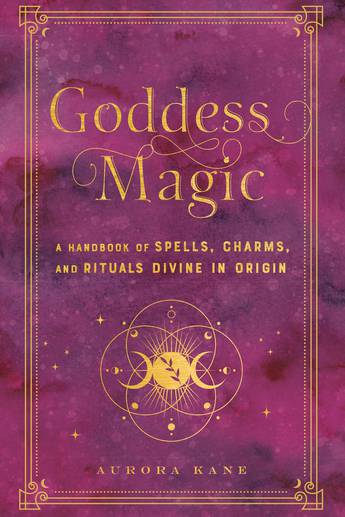 Goddess Magic is a comprehensive spell book featuring rituals, altars, and spells to honor the wide pantheon of goddesses and their magical properties.

Tune into the divine power of Goddess Magic, featuring a directory of deities alongside 50 spells, altars, and exaltations to amplify your highest vibes and attract fulfillment, success, friendship, growth, love, and fortune. Goddesses, both new and old, will lend their powers to those who seek their favor. Goddess Magic helps you channel divine power while also helping you find your patron deity of choice. Connect with your spiritual heritage and tap into the powers of your ancestors and all the mystical beings around you.

This beautiful handbook contains well-known goddesses from the ancient world famously claimed by witches throughout the ages as well as other, less common ones, like catholic patron saints, around whom specific spells and rituals have grown. Each goddess rules over her domain, protecting and inspiring those who seek her favor with traditional rituals and spells praising her. Her symbols, favorite offerings, and favored forms of worship are all explained in the same illustrated and informative way as the previous books in the series. Here is but a taste of the powerful patrons you can learn about:

- HECATE is the Greek goddess of witchcraft and divination. Her roman counterpart is called TRIVIA and both accept offerings at crossroads. She transmits good news of the future, resides as a patron deity over divination spells. She's an excellent guide for new ventures and is a powerful guardian.
- KAMALA is an incarnation of the Hindu goddess Lakshmi, the goddess of wealth and creativity. Invoke her to bring creative skills so that you can fill your life with pleasure and wealth of every kind by offerings of rice and ghee.
- MARIE LAVEAU may be the most influential American practitioner of the magical arts. The notorious Voudou Queen of New Orleans dispensed charms and potions (even saving several condemned men from the gallows), told fortunes, and healed the sick.
- SAINT LUCIA is the bearer of light in the darkness of winter. She is the patron saint of the blind, authors, cutlers, glaziers, laborers, martyrs, peasants, saddlers, salesmen, and stained glass workers.
- YEMAYA is the Yoruba Orisha or Goddess of the living Ocean, considered the mother of all. She is the source of all the waters, including the rivers of western Africa, especially the River Ogun. She is associated with the Orisha Olokin (Who is variously described as female, male, or hermaphrodite), Who represents the depths of the Ocean and the unconscious, and together They form a balance. She is the sister and wife of Aganju, the God of the soil, and the mother of Oya, Goddess of the winds.

The Mystical Handbook series from Wellfleet takes you on a magical journey through the wonderful world of spellcraft and spellcasting. Explore a new practice with each volume and learn how to incorporate spells, rituals, blessings, and cleansings into your daily routine. These portable companions feature beautiful foil-detail covers and color-saturated interiors on a premium paper blend.

Other titles in the series include: Witchcraft, Moon Magic, Love Spells, Knot Magic, Superstitions, House Magic, and Herbal Magic.
More books by this author More books in this series

Aurora Kane—author of Moon Magic, House Magic, and Herbal Magic—is a practicing witch and herbalist with many decades (some say centuries) of experience in casting and conjuring. She lives in the Northeastern United States where she is a founding member of the Coven of the Moonbeam Ravine.