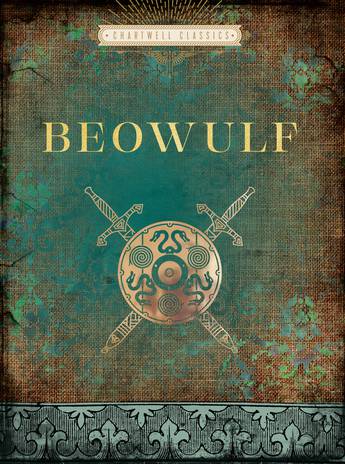 In this Anglo-Saxon epic, the hero Beowulf fights horrifying, ghastly monsters in his bid to save the hall of Hrothgar, King of the Danes.

Composed by an anonymous Anglo-Saxon singer toward the end of the first millennium CE, Beowulf is an Old English epic tale recounting the adventures of Beowulf, a Geatish hero from present-day Sweden. He is called on by Hrothgar, King of the Danes, to defeat Grendel, the powerful monster that threatens his great hall. As one of the earliest extant poems in a modern European language, it depicts a feudal world of blood, victory, and death-a world that exalts heroes who travel great distances to prove their might, against all odds, defeating supernatural beasts.

Ringing with the beauty, power, and artistry that have kept its poetry alive for a thousand years, this venerable tale is now available as an elegantly designed, jacketed hardcover edition translated by John Earle with an introduction from early British literature and epic poetry scholar and professor Tom Schneider.

Other titles in the Chartwell Classics Series include: Complete Fiction of H.P. Lovecraft; Complete Grimm's Fairy Tales; Complete Novels of Jane Austen; Complete Sherlock Holme; Complete Tales & Poems of Edgar Allen Poe; Complete Works of William Shakespeare; Divine Comedy; Alices Adventures in Wonderland and Other Tales;The Essential Tales of H.P. Lovecraft; The Federalist Papers; The Inferno; The Call of the Wild and White Fang; Moby Dick; The Odyssey; Pride and Prejudice; The Essential Grimm's Fairy Tales; Emma; The Great Gatsby; The Secret Garden; Anne of Green Gables; The Essential Tales and Poems of Edgar Allan Poe; The Phantom of the Opera; The Communist Manifesto and Das Kapital; Republic; Frankenstein; Twenty Thousand Leagues Under the Sea; The Picture of Dorian Gray; Meditations; Wuthering Heights; Alice's Adventures in Wonderland and Through the Looking-Glass; A Tales of Two Cities; The Strange Case of Dr. Jekyll and Mr. Hyde and Other Stories; Adventures of Huckleberry Finn; Little Women
More books by this author

John Earle (1824-1903) was a British Anglo-Saxon language scholar and professor at the University of Oxford. He wrote more than a dozen books, including Two Saxon Chronicles Parallel (1865) and Anglo-Saxon Literature (1884).