The Complete Book of BMW Motorcycles 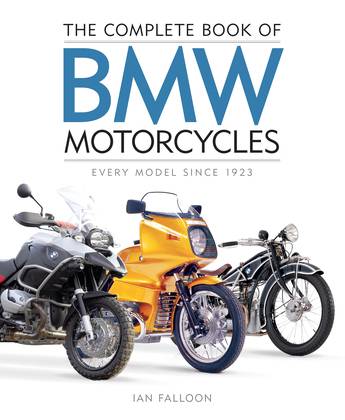 From its first bike, the 1923 R32, to todays retro-inspired R nine T, The Complete Book of BMW Motorcycles profiles every production motorcycle ever built by BMW.

The Complete Book of BMW Motorcycles offers a thorough year-by-year guide to every production machine ever built by Germany's leading motorcycle manufacturer. From the first model, the 1923 R32 that launched BMWs motorcycle dynasty, to the latest (and fastest) superbike, the S1000RR, this book captures nearly a century of motorcycling excellence in a combination of historic and contemporary photos. Technical specs are provided for each model. This comprehensive review covers all of BMWs bike families:

Among them, youll find all the classic bikes-pre-World War II BMWs like the R5 that defined performance in that era; the military R12 that carried the Wehrmacht as it blitzkrieged its way across Europe; the Earles-forked R69S that offered the perfect platform for mounting a Steib sidecar; the R90S cafe racer; the K1 "flying brick"; and the GS (Gelande Sport) series that launched a dual-sport revolution right up to today's world-class S100RR and retro-inspired R nine T. Like the other titles in Motorbooks Complete Book series, this guide to BMWs motorcycle output offers the most complete reference to the subject available.
More books by this author

Ian Falloon was born in New Zealand and studied engineering and music at Victoria University, Wellington. After a motorcycle accident brought an end to his career as a symphony orchestra oboist, he began writing articles about motorcycles for magazines including Classic Bike, Cycle World, Motorcyclist, Two Wheels, Motorcycle Sport, and Australian Motorcycle News. His first book, The Ducati Story, has run to several editions and has been published in three languages. The success of The Ducati Story led to a series of Ducati books and histories of Honda, Kawasaki, BMW, and Moto Guzzi motorcycles including Motorbooks titles The Complete Book of Ducati, The Complete Book of Moto Guzzi, The Complete Book of Triumph Motorcycles, and The Art of Ducati. With an interest and passion spanning decades, Ian now concentrates on collecting and restoring older Italian motorcycles, particularly Ducati, MV Agusta, Laverda, and Moto Guzzi. He lives in Melbourne, Australia, and is ably supported in his projects by his family.