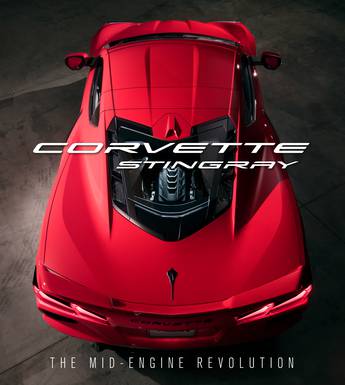 The officially licensed Corvette Stingray: The Mid-Engine Revolution takes you behind the scenes to understand the history, development, and technology behind Chevrolets all-new mid-engine Corvette.

The officially licensed Corvette Stingray: The Mid-Engine Revolution chronicles the full development story behind Chevrolet's re-imagined sports car with an engaging, detailed text and photography from GM's archives and Corvette team members. Corvette is Chevrolet's iconic performance car. Its importance to the brand cannot be overstated. Thus each new generation is sweated by Chevy's designers, engineers, marketing staff, and executives to ensure that it sets the bar higher than the preceding version. With the eighth generation, Chevrolet has done more than raise the bar or move the goalpost-they've torn down the stadium and started from scratch. For the first time ever in a production version, the new Corvette features a mid-engine configuration. Though Corvette engineers have experimented with this engine placement over the past several decades, 2020 marks the first time GM has committed it to production cars. Corvette already had prodigious power on tap, but its front-engine configuration put some limitations on its handling and traction. The new mid-engine Corvette eliminates any final performance barriers and takes the battle to supercar rivals like Ferrari, Lamborghini, and McLaren. Its the story every Corvette fan needs to read.
More books by this author
Category: Lifestyle
ISBN: 9780760367438
Publisher: Quarto US
Imprint: Motorbooks
Page Extent: 192
Format: Hard Cover
Subject: Lifestyle & personal style guides
Back to top
Advanced Search
My bag 0