The Complete Book of Ducati Motorcycles 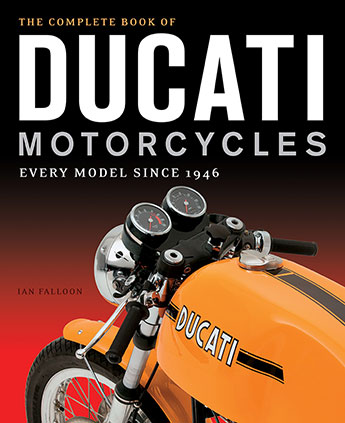 The Complete Book of Ducati Motorcycles traces the entire stunning chronology of sportbikes dreamed up by Ducati, from the 1950s to present day.

From the single-cylinder bikes of the 1950s to the high-performance sportbikes of today, The Complete Book of Ducati Motorcycles showcases the entire spectrum of Ducati.

Legendary Ducati motorcycles have something of a rags-to-riches story. This Italian motorcycle manufacturer began by selling motorized bicycles to impoverished residents of post-World War II Italy. Today, Ducati is the world's premier manufacturer of street motorcycles whose sales continue to rise year after year. Its svelte, hyper-accelerating motorcycles are two-wheeled wonders that are fluent in the language of speed.

The Complete Book of Ducati Motorcycles traces the stunning chronology of the motorcycles dreamed up by Ducati, from the 1950s to present day. Laid out for the first time in encyclopedia form with gorgeous photography and insights from Ducati expert Ian Falloon, this book offers motorcycle enthusiasts a closer look at the craftsmanship, power, and beauty of these extraordinary motorcycles. The book features all of the motorcycles from Ducati's storied history, including the groundbreaking Desmodromic 750 Super Sport, the Mike Hailwood Replica, the Superbike-dominating 916, and the epic Panigale.

From the street bikes that gave birth to the very notion of the modern superbike to the racing motorcycles that dominated tracks in Great Britain, Europe, and North America since the latter part of the twentieth century, The Complete Book of Ducati Motorcycles runs the full gamut of sportbikes. It's a collection that demands shelf space in the library of any true motorcycle collector or fan.
More books by this author

One of the world's foremost motorcycle historians, Ian Falloon is the author of more than twenty books on motorcycles including The Ducati 750 Bible, Ducati 900 Bible, Ducati Story, Moto Guzzi Story, Honda Story, Kawasaki Story, BMW Story, Moto Guzzi Sport Bible and Laverda Twin and Triple Bible. He has a small collection of classic sporting motorcycles, including a 1974 Ducati 750 Super Sport that he has owned since 1976. A freelance contributor to a number of motorcycle magazines around the world, Ian Falloon was born in New Zealand but currently lives in Australia with his wife Miriam, and sons Ben and Tim.