Inspiration for the new dad generation 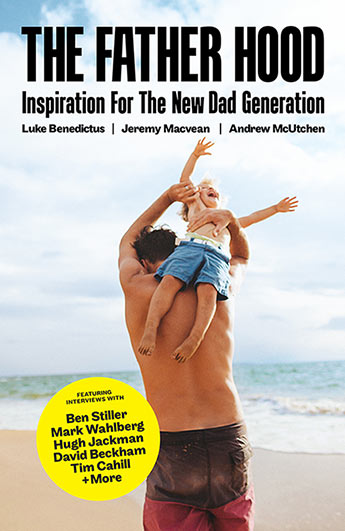 It's official: Dads need a rebrand. The Father Hood celebrates the rapidly-growing tribe of hands-on dads who are discovering that fatherhood is the making of them.

"The most important thing about being a dad is to be an example." Mark Wahlberg

Welcome to The Father Hood. Where we celebrate the growing tribe of hands-on dads who are discovering that becoming a father is the greatest opportunity a man can have to be better than he's ever been before; stronger, wiser and more compassionate. But there is no instruction manual or benchmark for modern dads aside from one golden rule: keep showing up.

With a mix of celebrity interviews - from Hugh Jackman, David Beckham, Osher Gunsberg and many more - as well as quotes and stats that capture the rise of the hands-on dad, The Father Hood is the guide to helping modern dads thrive and survive in the only job that really counts.
More books by this author

Luke Benedictus is the former editor of Men's Health magazine and has spent 20 years working in the media. Andrew McUtchen is an entrepreneur and former associate editor of GQ, founding Story Matters Most and Time+Tide, one of the world's most-read wristwatch websites. Jeremy Macvean was Movember's regional director for Asia-Pacific and has over two decades' experience in marketing and digital brand building.

They have 9 kids between them, are all incredibly dexterous at a change table, and live by the mantra that happier dads mean happier children and, ultimately, happier families.