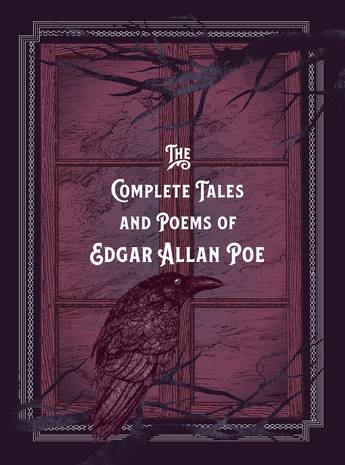 Part of the Timeless Classics series, The Complete Tales & Poems of Edgar Allan Poe contains every know tale written by the famous gothic American writer. His often macabre and dark works, which span the years from 1827 to his death in 1849, include "The Raven," "The Black Cat," "The Tell-Tale Heart," and "Annabelle Lee."

For Poe fans worldwide, this stunning gift edition features a gorgeous deckled edge, ribbon marker, and foil and deboss details on a vibrantly colored case. This elegant collectors edition includes over 70 of Poe's short stories, more than 40 melodious poems, and his only full-length novel, The Narrative of A. Gordon Pym. In addition, it also includes a compelling introduction by notable historian and biographer Daniel Stashower.

Tales include: The Unparalleled Adventure Of One Hans Pfaall The Balloon-Hoax; Mesmeric Revelation; Ms. Found In A Bottle; A Descent Into The Maelstrom; Von Kempelen And His Discovery; The Gold-Bug; The Facts In The Case Of M. Valdemar; The Thousand-And-Second Tale Of Scheherazade The Murders In The Rue Morgue; The Mystery Of Marie Roget; The Fall Of The House Of Usher; The Purloined Letter; The Tell-Tale Heart; The Black Cat; The Imp Of The Perverse; The Premature Burial; The Island Of The Fay; The Cask Of Amontillado; The Pit And The Pendulum; The Oval Portrait; The Masque Of The Red Death; The Assignation; The System Of Doctor Tarr And Professor Fether Mystification; How To Write A Blackwood Article; A Predicament; The Literary Life Of Thingum Bob, Esq.; Diddling; X-Ing A Paragrab; The Angel Of The Odd; Loss Of Breath; The Business Man; Mellonta Tauta; The Man That Was Used Up; Maelzel's Chess-Player; The Power Of Words; The Conversation Of Eiros And Charmion; The Colloquy Of Monos And Una; Silence-A Fable; Shadow-A Parable; A Tale Of Jerusalem; Philosophy Of Furniture; The Sphinx; The Man Of The Crowd; "Thou Art The Man"; Hop-Frog; Never Bet The Devil Your Head; Four Beasts In One; Why The Little Frenchman Wears His Hand In A Sling Some Words With A Mummy; Bon-Bon; Magazine-Writing-Peter Snook

Poems include: The Raven; Lenore; A Valentine; Hymn; The Coliseum; To -; Ulalume; To Helen; An Enigma; Annabel Lee; To One In Paradise The Bells; To My Mother; The Haunted Palace The Conqueror Worm To F-S S. O-D; The Valley Of Unrest The City In The Sea The Sleeper; A Dream Within A Dream Silence; Dream-Land; Ulalie; To Zante; Bridal Ballad; To F-; Eldorado; Israfel; To - For Annie; Scenes From "Politian"
More books by this author More books in this series

Edgar Allan Poe (1809-1849) is one of America's greatest and best-loved writers. Known as the father of the detective story, Poe is perhaps most famous for his short stories - particularly his shrewd mysteries and chilling, often grotesque tales of horror - he was also an extremely accomplished poet and a tough literary critic. Poe's life was not far removed from the drama of his fiction. Orphaned at a young age, he was raised by a foster family. As a young man, he developed problems with gambling, debts, and alcohol, and was even dismissed from the army. His love life was marked by tragedy and heartbreak. Despite these difficulties, Poe produced many works now considered essential to the American literary canon.