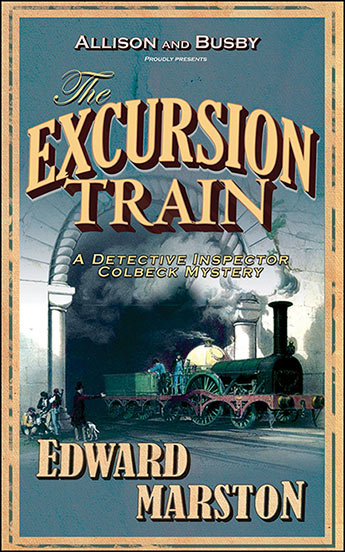 Rich in historical detail, The Excursion Train will hold you captivated from the beginning to the end of its journey.

As a bustling crowd clambers aboard the Great Western Railway excursion train, taking them to an illegal prize-fight in Berkshire, the train guard fears for the safety of his rolling stock. Little does he expect, however, the brutal murder of one of his passengers, Jake Bransby. On the shocking discovery of the body, Detective Inspector Robert Colbeck and his assistant, Sergeant Victor Leeming, are sent to the scene.

Faced with what initially appears to be a motiveless murder, Colbeck is intrigued by the murder weapon - a noose. When it emerges that Bransby has worked as a public executioner, he realises that this must be intrinsically linked to the killer`s choice of weapon. However, the further he delves into the case, the more mysterious it becomes. When a second man is strangled by a noose on a train, Colbeck knows that he must act quickly; can he catch the murderer before more lives are lost?
More books by this author More books in this series

Edward Marson was born and brought up in South Wales. A full-time writer for over thirty years, he has worked in radio, film, television and the theatre and is a former chairman of the Crime Writers' Association. Prolific and highly successful, he is equally at home writing children's books or literary criticism, plays or biographies.