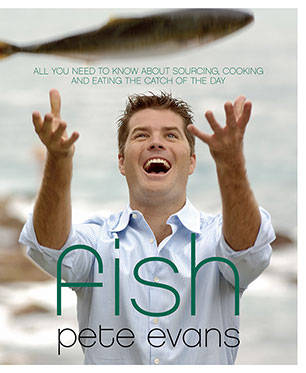 Star of Channel Seven's My Kitchen Rules, Pete Evans, shows Australian seafood as an accessible, easy and delicious starting point for any meal in Fish.

Pete Evans loves fish. He loves to seek them out in the wonderful waters of Australia, he loves to catch them, and sometimes even throw them back, but most of all he loves to work out the best way to cook them. Fish follows on from Pete's successful television series of the same name, in which he and his intrepid brother-in-law, Udo, explored the waters of Australia, catching river, estuary, beach and ocean fish and cooking them with the locals. Informative, witty and with Pete's personal touch throughout, the book focuses on Australian seafood as an accessible, easy and delicious starting point for any meal, from everyday dinners to the most gorgeous special occasion creations.

Recipes are divided by type of fish, listed in easy-to-use alphabetical order, with suggested alternatives given for each recipe. Fish also includes a wealth of information on Australian seafood, its health benefits, history and future.
More books by this author

Pete Evans has built a reputation as a chef, restaurateur, television presenter and, his personal favourite, fisherman. Pete's award-winning restaurants include Hugo's, Hugo's Lounge and Hugo's Bar Pizza. He has recently become presenter of Channel Nine's daily food show, 'Fresh', and his television work also includes the series of 'Fish', sixty episodes of 'Home' for The LifeStyle Channel and a documentary, 'Cooking for our Princess Mary'. Pete lives in Bondi in Sydney with Astrid and their daughters Chilli and Indii. Fish is his first book.