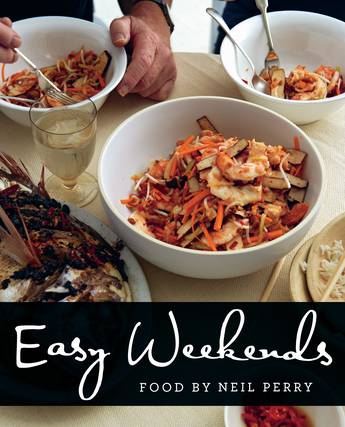 As Australia's best known chef, Neil Perry celebrates cooking at home, with more than 100 recipes that focus on flavoursome food for any weekend occasion.

As Australia's best known chef, Neil Perry is often associated with the food served at his successful restaurants around Australia, from the flagship contemporary Australian fine diner Rockpool, to his popular Rockpool Bar & Grill steakhouses and the Asian flavours of Spice Temple. However this book is a celebration of cooking at home, with more than 100 recipes that focus on flavoursome food for any weekend occasion. Whether you're looking for an easy and delicious family stir-fry on a Friday night, clever ideas for Saturday dinner party menus, or preparing a slow-cooked Sunday feast for friends, this book has an inspiring and accessible recipe for you.
More books by this author More books in this series

Neil Perry is one of Australia's leading and most influential chefs. He has managed several award-winning restaurants in Australia, and today concentrates on his flagship brand, the Rockpool Group, which includes Rockpool Sydney; Rockpool Bar & Grill Sydney, Melbourne and Perth; Spice Temple Sydney and Melbourne; and The Waiting Room, Melbourne. Neil has been creating menus for Qantas since 1997, redefining in- flight dining and service, and is the author of six cookbooks: Rockpool, Good Food, The Food I Love, Simply Asian, Balance & Harmony, and Rockpool Bar & Grill. Neil has been a television presenter on the LifeStyle Channel, and appeared as an Iron Chef on Iron Chef Australia.