A journey across the waves and into the deep 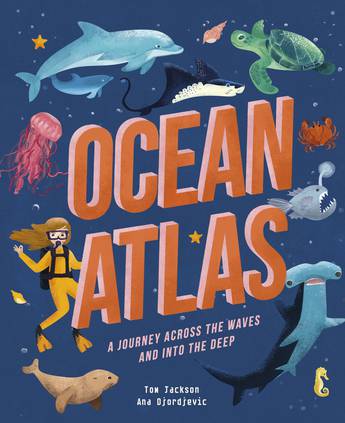 In this follow-on to Space Atlas (QED, 2018), readers will be taken on a journey across the waves and into the darkest deeps of the ocean. Covering geography, ecosystems and animals, this book is more than just an atlas of the Pacific, Atlantic and other oceans and seas.

A comprehensive exploration of our oceans, covering geography, ecosystems and animals through a mix of illustrations, photographs, maps and diagrams. Map out the oceans layers, from the sunlight zone to the abyss, exploring the conditions within each zone and the different creatures that live there, as well as exploring features of the ocean floor such as underwater volcanoes, thermal vents and the mid-Atlantic ridge. It also:

• Explores ocean currents and tides.
• Looks at the migrations of different ocean-dwelling creatures.
• Maps the sea bed, including information on how oceanographers gather their data
• Explores sea temperatures and ocean chlorophyll and plankton, looking at the impact these elements have on ecosystems.
• Looks at environmental issues such as pollution, acidification, ice-cap melt and rising temperatures.
More books by this author More books in this series

Tom Jackson is a science writer based in Bristol, UK. Over the last 20 years, Tom has written books, magazine and newspaper articles, for online and for television on a wide range of subjects and has worked on projects with Brian May, Patrick Moore, Marcus de Sautoy and Carol Vorderman and for major international publishers, such as Dorling Kindersley, National Geographic, Scholastic, Hachette, Facts on File and BBC Magazines. Tom studied zoology at Bristol University and has had spells working in zoos and as a conservationist. He's mucked out the polar bears and fed the penguins, planted trees in Somerset, surveyed Vietnamese jungle and rescued wildlife from drought in Africa. Writing jobs have also taken him to the Galapagos Islands, the Amazon rainforest, the coral reefs of Indonesia and the Sahara Desert. Today, Tom lives in Bristol, England, with his wife and three children, and can be found mostly in the attic.

Ana Djordjevic is an illustrator and graphic designer born in Serbia. After graduating from the Dutch Institute of Fine Art in Arnhem, Ana started out as an illustrator for various agencies.