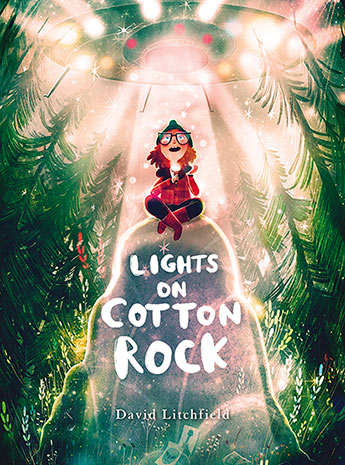 A little girl witnesses an alien spaceship landing at Cotton Rock near her house. She visits the spaceship and meets a young alien but is called home by her parents. She draws a picture of the alien she met and keeps returning to Cotton Rock as she grows up, in the hope that the UFO will come back. Eventually, after many years, she's got a son and a granddaughter of her own and she's starting to give up hope...
This new blockbuster from best-selling author David Litchfield is a tear-jerking story about never stopping believing and the importance of family.
More books by this author

DAVID LITCHFIELD first started to draw when he was very young, creating Star Wars and Indiana Jones mash up comics for his older brother and sister. His picture book The Bear and the Piano, won the Waterstone's Childrens Book Prize (Illustrated Book Category) and became a best-seller worldwide. It was shortlisted for 8 other awards in the UK and has sold in over 20 languages. David has since illustrated The Building Boy by Ross Montgomery (Faber & Faber, 2016), and his second book, Grandad's Secret Giant, published in April 2017.