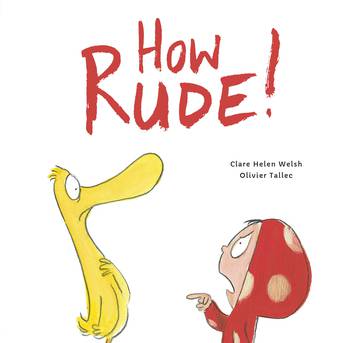 How Rude! follows ill-mannered Duck as he wreaks chaos at Dots tea party - a hilarious story about being rude and making up.

Join Dot and Duck in a simple, yet hilarious, story about kindness, manners and friendship that gets more and more chaotic with every turn of the page! Dot invites Duck to a tea party, but from the moment Duck enters the house, the tea party descends into chaos; from licking sandwich fillings to spitting tea, Duck gets ruder… and ruder… and ruder. Just how will Dot react to such outrageous behaviour?

Simple, funny and ultimately touching, this book will appeal to any child who is learning what it is not to be rude and, more importantly, what it is to be a true friend.
More books by this author More books in this series

Clare Helen Welsh is a children's book author who lives in Devon with her husband and two children. In 2013 Clare won the The Margaret Carey Scholarship for Picture book Writers and in 2014 she received the silver medal at The Greenhouse Funny Prize for her debut picture book Aerodynamics of Biscuits. She teaches primary school and has over ten years experience in Early Years and Key Stage One education.

Olivier Tallecs work has been called "sensitive", "stunning", "breathtaking", and "beautiful". Tallec was born in Brittany, France, in 1970. After graduating from the Ecole Superieure Darts Graphiques in Paris, he worked in advertising as a graphic designer, after which he devoted himself to illustration. Since then he has illustrated more than sixty books.