Friends Change the World: We Are The Apollo 11 Crew 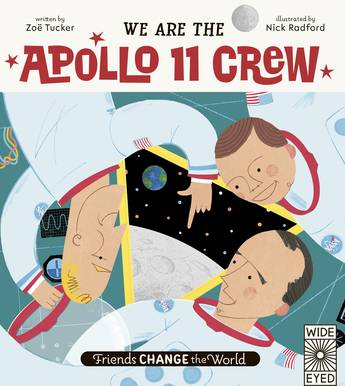 We Are The Apollo 11 Crew tells how, through incredible teamwork, astronauts Neil Armstrong, Buzz Aldrin and Mike Collins succeeded in their historic mission to the moon.

This inspiring picture book tells the amazing story of the first moon landing and the friends who made it happen.

Neil, Buzz and Mike were three talented people and together, they formed the Apollo 11 crew. They were going to be the first people to travel to the moon! It was a thrilling, exciting mission that no one had ever done before.

Each member of the team had a very special job and their own part to play to make it happen. Neil was the flight commander, Mike was the pilot of the main spacecraft and Buzz piloted the lunar module to the moon's surface. As they trained, lived, worked and played together, they formed a bond that was out of this world. Follow their once-in-a-lifetime trip to the moon, see a giant leap made for mankind and witness the incredible teamwork it took to get there.

Friends Change the World is a series of picture books that celebrates the power of friendship. From musical greats to sports champions, scientists and explorers to artists and activists, these are the true stories of real friends who achieved amazing things. Whether best friends since school or thrown together by a chance encounter, they supported and inspired each other to make their shared dreams come true. This charming series shows 4- to 7-year-olds how togetherness, respect and friendship can make the world a better place.
More books by this author More books in this series

Zoë Tucker is passionate about picture books. In her day job as a picture-book art director and designer, she has worked with best-selling artists including Waterstones-prize winner Lizzy Stewart, Axel Scheffler, Nick Sharratt and Helen Stephens. She is the author of Greta and the Giants, and books in the Friends Change the World series.Nick Radford is an illustrator based in Cornwall. His elegant line-work and use of minimal palettes, bold shapes, texture and collage are inspired by traditional printing techniques, and his love of 60s soul, RnB and jazz. His artwork for the children's book, We Are Music was shortlisted for a World Illustration Award in 2019.