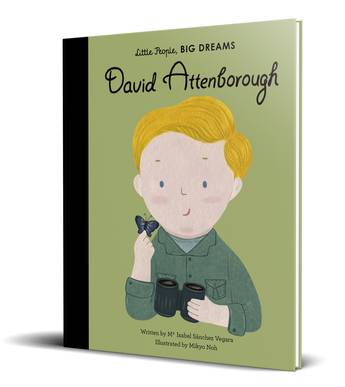 New in the series, discover the life of David Attenborough - the inspiring broadcaster and conservationist.

Little David grew up in Leicester on the campus of a university, where his father was a professor. As a child, he spent hours in the science library, collating his own specimens and creating a mini animal museum. When he was old enough to go to university, he studied science and zoology - but what he wanted most of all was to be close to the animals he was studying. So, he started working in television, visiting animals in their natural habitats and telling the world the untold stories of these animals. This moving book features stylish and quirky illustrations and extra facts at the back, including a biographical timeline with historical photos and a detailed profile of the brilliant physicists life
More books by this author

Maria Isabel Sanchez Vegara, born in Barcelona, Spain, is a writer and creative director in constant search of new concepts for children's books. Working for more than fifteen years for clients in top advertising agencies, her books combine creativity with learning, aiming to establish a new and fresh relationship between children and pop culture.
Mikyo Noh is an illustrator based in London, United Kingdom. Originally from South Korea she worked as a fashion designer. Her works are used across stationery, children's magazines and children's books.