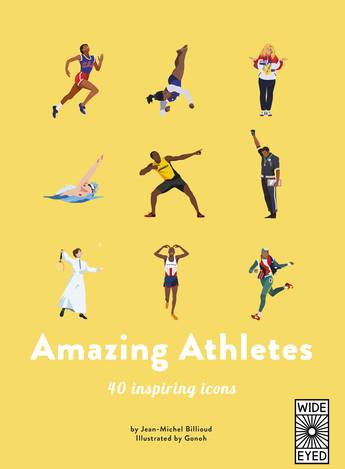 40 Inspiring Icons: Amazing Athletes introduces you to the top 40 Olympic athletes of all time with fun illustrations and key stats and facts.

Each spread presents a single athlete, highlighting key facts about their careers, honours, stats and legendary performances, along with a fun, illustrated depiction of them. Every athlete is a winner in their own way, but who will you choose as your hero?

Each book in the 40 Inspiring Icons series introduces readers to a fascinating non-fiction subject through its 40 most famous people or groups. Explore these other great topics through their most interesting icons: People of Peace, Super Scientists, Soccer Stars, Music Legends, Black Music Greats and Greek Gods and Heroes.
More books by this author

Jean-Michel Billioud studied at the Institut Français de Presse and the Ecole des Hautes Etudes en Sciences Sociales. He has since published a hundred non-fiction books on various themes with two obsessions: explaining things as simply as possible and rescuing from oblivion what times wants to erase. He lives in France.