Let's take a journey around the world from A to Z! 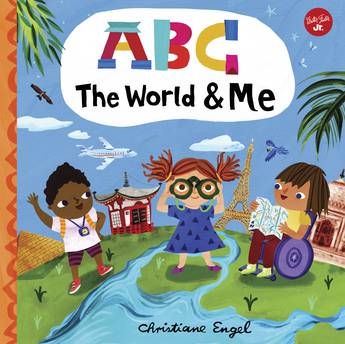 Explore 26 natural and human-constructed wonders around the globe-from A to Z-with ABC The World & Me (ABC for Me).

With ABC The World & Me, take a journey to 26 amazing places all over the globe-from A to Z! There are so many wondrous places to see and wonderful people to meet. From the long, winding Amazon River, to a bustling city like Baku, to the ancient pyramids of Chichen Itza, to thousands of other locations, people can live in and visit the most amazing places, from A to Z!

ABC The World & Me presents a whole alphabet of places! This book shows that there are so many things to appreciate about our world, including natural wonders like the Grand Canyon and Victoria Falls, as well as human-constructed marvels like the Eiffel Tower, the ancient city of Machu Picchu, and the Taj Mahal. Pairing a place with each letter of the alphabet, ABC The World & Me features colorful illustrations, as well as text that gets kids thinking not only about where they are in the world but also their connection to all the other people in it.

A fun read for the whole family, this book is perfect for teaching toddlers their ABCs while inspiring a curiosity about the world we live in. With endearing illustrations and mindful concepts, the ABC for Me series pairs each letter of the alphabet with words that promote big dreams and healthy living. Explore even more possibilities with ABC for Me:

Christiane Engel is an award-winning illustrator and author. Her work can be found in a huge variety of kids' books all over the world, including a kids' bible and a children's atlas as well as Walter Foster Jr.'s ABC Love and ABC Yoga. Her instantly recognizable children's characters appeared in an award-winning ad campaign in the UK and she works with the Surrey County Council to create advertising and educational material for families. She has also created illustrations for animated programs for clients including the BBC. Christiane lives by the sea in southeast England with her little family. Learn more at chengel.myportfolio.com.