A Quick History of the Universe

From the Big Bang to Just Now 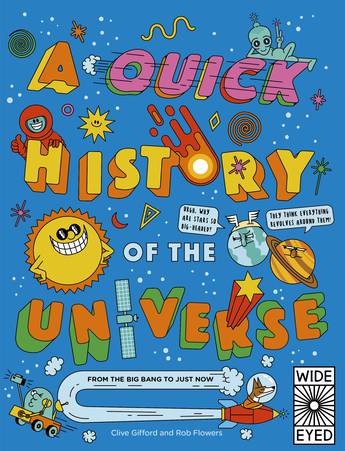 A Quick History of the Universe takes a whistlestop tour through - funnily enough - the history of the universe, from the Big Bang to right now. The narrative text and cartoons cover all you need to know about space, forces and physics.

Strap in for a rip-roaring ride through the history of the universe, starting with the Big Bang, and bringing us right up to present day. What was the universe like when it was a few seconds old? How had it changed by its millionth birthday? And when did time even start, for that matter?! The story of the last 13.8 billion years in one handy volume, you can read about the start of stars, the growth of galaxies and the production of planets. Plus, there are some great dad jokes. Hold on tight... Read the story of how the universe developed, and discover:

In the beginning there was... what exactly? What was the beginning of the universe actually like?
Some suns have just got that star quality... but which stars are really hot stuff?
Who's who in the galactic zoo? There are several different types of galaxy in the universe. How do they form?
The tragic death of the star - how do stars die, and why?
What's blacker than black… a black hole!
Peek into the future - what will the universe be like in the next few billion years?
How do we even know this stuff? Read about the scientists who are figuring it all out.

Packed with fun cartoons and facts, A Quick History of the Universe tackles the biggest topic in the universe - literally - in chronological order. Before you know it, you'll be an expert on the history of space, the universe and everything.
More books by this author

Clive Gifford has travelled to more than 70 countries, climbed rocket launch towers, ridden on robots and flown gliders. Hes had more than 200 books published and received nominations for or won Royal Society, School Library Association, Smithsonian and TES awards. He won the Blue Peter Book Award for Best Book with Facts 2019 for his title The Colours of History (QED). Clive lives in Manchester, UK.