Learn the art of cartooning step by step 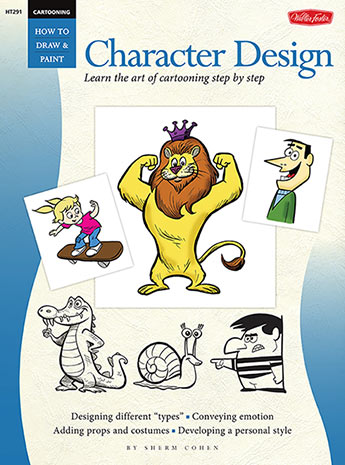 Learn the art of cartooning step by step.

This addition to the Cartooning category of our How to Draw and Paint series features the guidance of accomplished cartoonist Sherm Cohen -- a co-director of The SpongeBob SquarePants Movie. The book teaches artists the basics of creating cartoon characters, from using basic shapes and conveying age and mood to adding props and costumes and much more. It also brings the artistic process up to date by touching on the use of computers in cartooning. Featuring step-by-step instructions and a wealth of original images, this book is a must-have resource for any aspiring cartoonist!
More books by this author More books in this series

Storyboard Artist Sherm Cohen has helped bring to life some of the biggest animation hits of the past decade-and-a-half: His directing, storyboarding and writing credits include the first four seasons of SpongeBob SquarePants, Hey Arnold, Kick Buttowski, Disney's Fish Hooks and The SpongeBob SquarePants Movie (as lead storyboard artist and character designer).

Sherm was a founding member of the Phineas & Ferb crew, where he co-wrote and storyboarded for two seasons. In 2011, Sherm received an Emmy Nomination for directing Disney's Kick Buttowski.