A History of Social and Political Protest Graphics 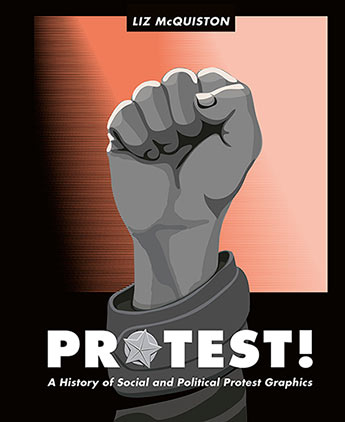 The best examples of the posters, prints and other graphics that have been used for political protest throughout history and right to the present.


Social discontent and political protest have been expressed visually as well as verbally throughout the ages. Graffiti scribbles on a wall, pictures scattered in the street during marches, posters spread through the environment: all have played their part. For such agitational images represent a power struggle; a rebellion against an established order and a call to arms, or a passionate cry of concern for a cause.
The book begins in the 16th century with the Reformation, when images could be produced in multiples. It then travels through decades and centuries of graphics: protesting against the miseries of war; satirising the foibles of royalty, politicians, religions, and society in general; calling for an end to racial discrimination and apartheid; demanding freedom from tyranny and dictatorships; struggling for LGBTQ+ rights; and, finally, attending to 21st-century concerns and Trumpisms. Each chronological chapter opens with a short introduction offering historical and artistic context to the period, followed by a copious and wide-ranging display of powerful protest graphics, grouped together by event or movement.
Encompassing an astounding breadth of emotion-from hilarious satire to utter horror-Protest! is a tribute to the liberating concept of hard-won 'freedom of speech' throughout history, and which still has agency in current times.
More books by this author

Liz McQuiston has authored a substantial number of books on graphic design-related subjects — her best known mix design and politics, including Graphic Agitation, Suffragettes to She-Devils, and Women in Design. She maintained a graphic design practice for more than twenty years and in education has held teaching and management posts ranging from vocational level to Masters level, including the post of Head of Department of Graphic Art and Design at the Royal College of Art.