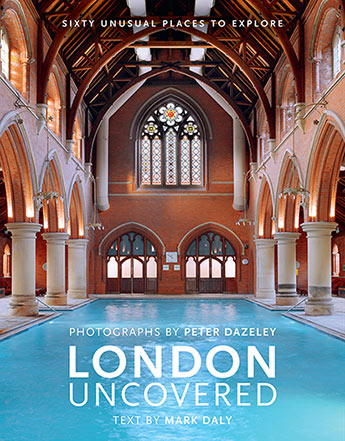 Opens the doors to sixty of London's most intriguing places, all visitable but many not widely known.

This unique London guidebook opens the doors to more than sixty of the capital's most intriguing places, all visitable but not widely known. From museums of the unusual, places of worship, palaces of entertainment to some of the most historic and ornate shops, houses and hostelries in the city, take a trip through the capital's hidden treasure and discover a picture of a London which is strange, gaudy, grand and inventive. Describing the history and the character of each place, the book uncovers a wealth of stories about an endlessly fascinating world city with its own unique character.
This fresh edition for 2018 includes over a dozen new locations, including the Dennis Severs House, Les Ambassadeurs Casino and Sir John Soane's Museum.
More books by this author More books in this series

MARK DALY is a writer and publisher with a longstanding interest in secret and little-known aspects of London. He has also devised a number of London walking tours, focussing on little-known or unusual aspects of the city. His previous book with Dazely is the acclaimed Unseen London.
PETER DAZELEY, known as Dazeley, studied photography at Holland Park School, now known as the 'Socialist Eton'. His work has won many awards from organisations across the world, including the Association of Photographers and the Royal Photographic Society in the UK, EPICA in France, Applied Arts Magazine in Canada, and Graphis Inc. in the USA . Dazeley is one of the few modern photographers whose fine art work is produced as platinum prints. Dazeley became a member of the Association of Photographers in 1977 and became a life member in 1984. In June 2013 he was awarded a Fellowship by the Royal Photographic Society. Fellowship is the highest distinction of the RPS and recognizes original work and outstanding ability. He is the photographer of Unseen London.