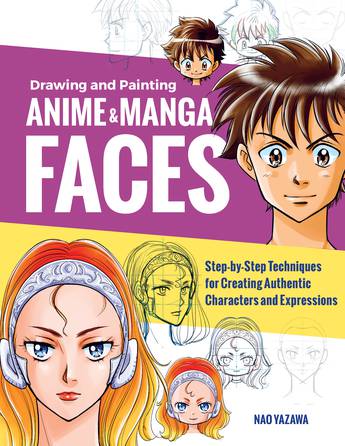 • Manga Faces 101. Learn about must-have supplies, basic drawing techniques, and a summary of the process from rough sketches to finished drawings.
• Essential Guide to Expressive Characters. Explore how to draw key anime and manga characters as well as how to depict a range of emotions for each, from delight to sadness to terror.
• Inking, Coloring, and Special Effects. Take your drawings to the next level by adding striking definition, stunning color, and special finishing touches that will give your characters just the right note of authenticity.

Drawing and Painting Anime and Manga Faces gives you the tools you need to create expressive characters that will make your anime and manga stories come alive.
More books by this author

Nao Yazawa is a Japanese manga artist residing in Tokyo, Japan. She is most well known for her manga series Wedding Peach, which was made into an anime series of the same name. Both the manga and anime series were translated into several languages. Since 2008, she has been teaching manga workshops (in English) internationally, in Germany, Denmark, Austria, Canada, and the United States. She teaches in-person workshops at Nakano Manga School, in Nakano-ku, Tokyo, where she also maintains the studio where she hosts her online classes. She is the author of the instructional guide Manga Drawing Deluxe.