Secret Houses of the Cotswolds 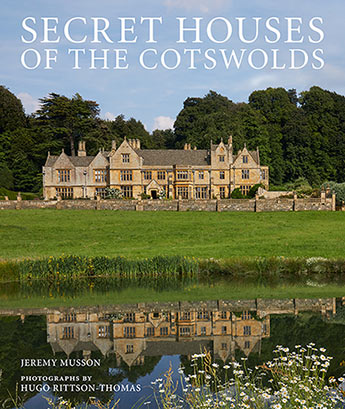 Secret Houses of the Cotswolds is a private tour of 20 of the most beguiling castles, estates, palaces and manor houses in this much-loved region including Daylesford, Stanway, Sudeley Castle and Hilles House.

Secret Houses of the Cotswolds is a personal tour of twenty of the UK's most beguiling houses in this much loved area of western England, defined by its distinctive honey-coloured stone, rolling hills, picturesque villages and the most traditional English landscape. Author and architectural historian, Jeremy Musson, and Cotswolds-based photographer Hugo Rittson Thomas, offer privileged access to twenty houses, from castles and manor houses, by way of eighteenth- and nineteenth-century mansions, revealing their history, architecture and interiors, in the company of their devoted owners.
In the footsteps of artists and designers from Georgian designers such as William Kent to Victorian visionary, William Morris, founder of the arts and crafts movement, we find a series of fascinating country houses of different sizes and atmospheres, which have shaped the English identity, and in different ways express the ideals of English life. Most of the houses included here are privately owned and not usually open to the public, and all of these houses featured in this book can be enjoyed through the eyes of owners, as well as an experienced architectural historian, and an award-winning photographer.
More books by this author More books in this series

Jeremy Musson is an architectural historian, writer and broadcaster who worked for Country Life for twelve years, first as Architectural Writer and then as Architectural Editor. He has a particular enthusiasm for the late-seventeenth-century and early-eighteenth-century English county houses and has visited all the surviving works of Vanbrugh. He is the author of The Country Houses of Sir John Vanbrugh, The English Manor House: from the Archives of Country Life and How to Read a House. Born in London in 1965, he now lives with his family in Cambridge.